We really can't afford Outer Banks vacations, or even a trip abroad just right now. But we're blessed enough to have roof over our head, cloths on our back, some money in the bank, etc.

My cousin found two families at the Plaza de Dilao with two infants exposed to the elements. One is just 3 weeks old, the other 4 months old. She was affected by their plight and was asking me if I haven't kept some of my son's socks.

Good thing I actually still had 4 pairs of infant socks. But I'm at a loss because I really gave away my son's stuff already for Typhoon Ondoy victims. 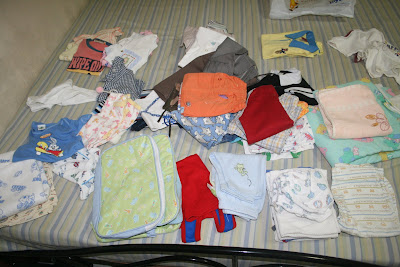 The only things I have saved for myself were two newborn onesies (one I gave to my cousin to give away to the baby) and the other things that are still here, I have promised already to a Mom. My son's past two years old... I really have no more newborn stuff to give.

Now, I should really seek them out and try to convince the Mom of the 3-week old to nurse the 4-month old, whose Mom is working as a maid somewhere. And I should see what we can give to those families.

I can't save every child... but that doesn't mean I don't wish I could.

A friend is also enlisting my help to help her get her future niece/nephew adopted. See, her brother (and his wife) are drug addicts and they already have a one year old. The wife is pregnant again and they usually vanish for several days and are unemployed because of their addiction so my friend and her Mom wants to have the new baby adopted. They even want to just sneak the newborn away and bring it to me so that her brother couldn't go after it anymore.

I didn't want that though because I know it's kidnapping. Plus, my heart always go out to adoptive parents whose hopes get high one minute and get dashed the next. So i'd rather adoptive parents pick the baby up from the hospital... give their names to be placed on the birth certificate instead.

Yes, I am a little ashamed to say that there are cases where I also don't like how the DSWD system works.

All these babies needing to be saved...
Posted by Mommy Mec at 11:21 AM

I am a Mom

I have always wanted to be a Mom. But I have stumbled many times in my journey. Still, I continue investing myself. I continue stumbling as I learn. I continue loving. I continue striving. I continue changing, evolving, adapting. Thus, I reap the benefits of being an intentional parent. And everyday, I am fulfilled. I may have few pictures with my sons, since I usually take the photographs. But their first stories happened with me there as witness. Therein lies my privilege.

We offer information, counselling and support.